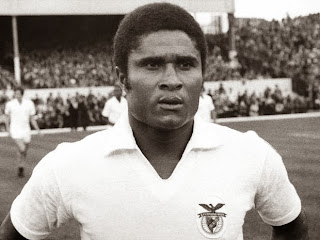 After a march of the spherical tender in which it became football legends in Portugal, Black Panther died Eusebio da Silva Ferreira at dawn today at the age of 71 years.
And Ferreira departed after suffering a cardiac arrest was the last health problems suffered since 2012 and deposited evacuated the hospital on several occasions.
And Ferreira drilled a name of one of legends of football world after leading his team to third place in the World Cup in England in 1966, also led Benfica towards the summit in the sixties of the last century.
Eusebio was born in 1942 in Maputo, the capital of the former Portuguese colony of Mozambique, where he played since he was 15 years old in Sporting de Lourenço Marques.
His fame reached to the capital Lisbon, where poles of Portuguese football at the time Benfica and Sporting for the use of his services.
In the end, Eagles to Benfica managed to join the player, and he played the first of his meetings with the first team Benfica in 1960 and a year later joined the Portuguese national team.
he Scored in his first game with the Benfica Eagles in front of Atletico three goals, and in the same season, the Portuguese team was crowned Champions League at the expense of Barcelona.
But he made the best level with the first team in the following season, to lead his team to the coronation of the Champions League at the expense of Real Madrid.

In this match, the team from changing his delay result by 2-0 into wins 5-3 at the expense of the team included in its ranks Di Stefano and Puskas.
Despite the excellent performance which he presented during that season, he finished second in the Prix Golden Ball, which was crowned by 1965, also finished second in the race in 1966.

But the most highlight of his contributions with the Portuguese national team is occupying third place in the World Cup in England in 1966, the best result achieved by the team in its history, and the competition's top scorer with nine goals.
During the period between 1961 and 1977, Eusebio scored 757 goals without counting his professional short trip in the United States in 1974.
After his retirement, Benfica crowned him on several occasions and put a statue of him at the Stadium of Light in holiday birthday session.
And he was chosen by the Union of European Football Associations as best Portuguese player of all time and was ranked seventh in the list of the International Federation of the game to the best players of all time.
Email ThisBlogThis!Share to TwitterShare to FacebookShare to Pinterest