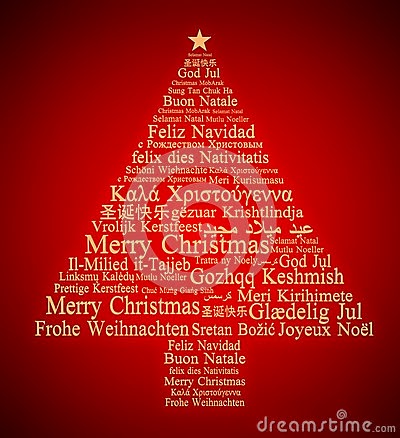 Little people in USA and England take a time to greet each other “ Merry Christmas “ although all over the world people using the same phrase in different languages .


The first greeting of Christmas has been celebrated since 4th century AD when John Fisher sent a letter to his friend Thomas Cromwell in 1543 and it was recorded in 1816 as Merry Christmas.
"And this our Lord God send you a merry Christmas, and a comfortable, to your heart's desire," he said.
In England the popular Christmas carol “ We wish you a Merry Christmas” where the wealthy families gave out figgy puddings to carolers.
Then the it spread out from England to the rest of the world , where in North American and some parts of England say Merry Christmas, including Christmas Island , Fiji , Jamaica , and the Cayman Islands.
In Spain , its neighboring countries , and Las Vegas they say “Feliz Navidad”, while in Portugal and some countries speaking Portuguese like Brazil and Indonesia they say “Feliz Natal or Boas Festas”.
In Dutch speaking countries they say “Zalig Kerstfeest”, as well as in Belgium also, and in Ireland they say “Nollaig Shona Dhuit”, and in Netherland they say “Vrolijk Kerstfeest en een Gelukkig Nieuwjaar” and also “ Happy New Year” or “ Zalig Kerstfeest”.
In the Middle East, first in Israel where people say “ Mo’adim Lesimkha” or Chag Molad Sameach”, and in Arabic countires like Syria, Suadi Arabia, Iraq, Qatar, they say “Milad Mubarak”.
Finally in Asia , where in Japan they say” Merii Kurisumasu” and in China they say “”Kung His Hsin Nien Bing Chu Shen Tan.”
Email ThisBlogThis!Share to TwitterShare to FacebookShare to Pinterest