Christina Milian is always the center of attention 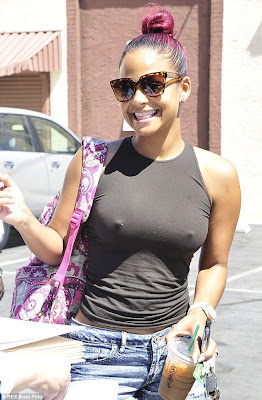 The singer Christina Milian who is 31 year old arrived on Sunday to the show ‘The Dancing with the Stars” which she will share in it. Christina Milian always knows how to be attractive and to be the center of attention.
She was wearing casual clothes in interesting way. She was wearing black t-shirt and jeans short and thigh high boots, she looked different and confident.
When she arrived to the studio she makes sure that everyone saw her when she went out of her car as she was in a fashion show. She was tied her pink her above her head and was putting sunglasses and she was going to the studio to start the practice with her partner Mark Ballas.
Before she started practicing she changed her clothes and her thigh high boots. She wore gray playsuit and white Nike trainers and she carried her high boots to the car.
Christina Milian is engaged and when people asked her about him she did not say his name she said that she is with someone who she loved and she had a great relationship and she is so happy and has a great time with him. She is engaged to Jas Prince who is the son of Rap-A-Lot records CEO James Prince.
Christina is a mother to 3 year daughter from her ex-husband. She said that she wants to share in Dancing with the Stars as a preparing for the weeding.
She said that it is great experience and she loves dance and it will help her in her weeding, she added that she is very proud of herself by sharing in this show. She now is preparing herself for the performance and she feels so excited. She said that she will do her best to win in this great show .
We wish her good luck in Dancing with the Stars and we wish her happy life.
Email ThisBlogThis!Share to TwitterShare to FacebookShare to Pinterest